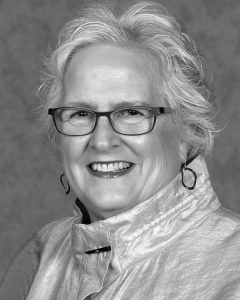 Ann Hoaglin has been a decades-long civic volunteer in Central Ohio. Though she previously had careers in product development and market research at Rubbermaid and as a budget analyst for the State of Ohio, she feels privileged to be able to give back to the communities in which she has lived. As such, Ann has an extensive history of involvement in nonprofit organizations in the state and region.

Ann is a trustee and former board president of the Columbus Museum of Art. She has served on numerous boards, including the Board of Trustees of the Columbus Metropolitan Library and the Board of Directors of I Know I Can, a college access program in Columbus. Ann also is a former director of the Wooster Arts Center, a former board member of the Mental Health Board of Wayne County, and a former chair of Compass, a homeless prevention program in Columbus. As an acknowledgment of her dedication to community service, Ann, alongside her husband, Tom, were the 2014 recipients of the Columbus Metropolitan Library’s Julian Sinclair Smith Award, which honors inspiring individuals with a passion for lifelong learning. Ann and Tom also are members of the library’s Pugh Society, a distinctive philanthropic recognition.

As an active alumna volunteer at Denison, Ann has served as a career advisor and campaign volunteer. She also has been a member of the longstanding Denison University Research Foundation board, which gives grants to support Denison faculty research. She has been an active participant in Women for Denison, the Campaign Feasibility Study, the Greek Life Committee, and her Reunion Gift Committee. She has been a Class Reunion volunteer, and she remains connected with Kappa Alpha Theta as a donor to her sorority’s House Preservation Fund. Ann and Tom are also notably recognized for their philanthropic leadership in the Ann and Thomas Hoaglin Wellness Center at Denison, which is scheduled to open in the fall of 2022.

Ann and Tom reside in Columbus, where they settled permanently in 2001 after living in other cities in Ohio, Alabama, and Texas. Their loyal and generous contributions of both time and talent to Denison continue to serve as an ideal example to others who aspire to support the college in a multitude of profound and lasting ways.