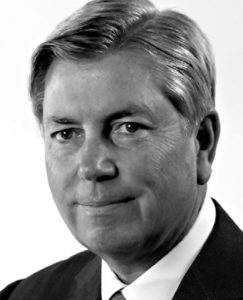 Mark is currently the co-chairman of Tudor Group Holdings, headquartered in Stamford, Conn. He previously served as CEO and co-chair from 2010 to 2017, and president from 1988 to 2009.

Tudor is engaged in the management of client and proprietary assets in the global securities, futures and currency markets.

From 2011 to 2017, Mark chaired the Board of Trust at Vanderbilt University. He is now a trustee emeritus there. He also serves on the boards of other non-profits that focus on medical research, performing arts and community support.

Closer to our hearts here in Granville is Mark’s service as chair of Denison’s Board of Trustees from 2003 to 2009, a period during which the college experienced significant growth of the endowment, dramatic improvements to the campus, and extraordinary advancements in admissions.

Mark served as an active Denison trustee for 24 years until 2014 and is now a life trustee. His leadership made possible the creation of Denison’s Sen. Richard G. Lugar Symposium in Public Policy, and he has contributed to the establishment of various chairs and scholarships.

While at Denison, Mark was a history major and was selected as History Department Fellow and a member of Phi Beta Kappa. He counts some Denison faculty and administrators as important influences in his life, particularly Professors Michael and Amy Gordon, President Joel Smith, and Registrar Sam Schaff.

Mark served as a member of student government, head of the Denison Lecture Series, and as president of the Interfraternity Council.

Mark lives in Scarsdale, N.Y., Telluride, Colo., and Palm Beach, Fla., with his wife, Susan Jakust Dalton ’73. Susan has been active in retailing, designing women’s fashion accessories, and has written four books. They have three sons, Erik, Kurt, and Chris, and three grandchildren.