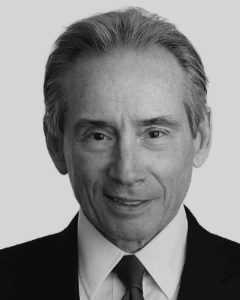 Paul Dimitruk is a co-founder and senior partner of Partners Capital Investment Group, a leading international outsourced investment office. The 230-person firm manages more than $40 billion in assets for endowments, foundations, pensions, investment professionals, and high-net-worth families in Europe, North America, and Asia. Since co-founding the firm in 2001, Paul has contributed to its success in multiple ways, including 10 years as executive chairman.

Paul began his career in 1974 as a lawyer, ultimately becoming the managing partner of a global law firm’s European practice. He entered the finance sector in 1985 when he became a partner of a global private equity firm. Paul has founded multiple companies in the investment sector.

Paul has long prioritized service to others. He is a trustee of the United States Naval War College Foundation. Paul is a member of the Business Executives for National Security (BENS), a coalition of senior business and industry executives who support U.S. national security. He is the Co-founder and former Chairman of the Navy SEAL Foundation New England. Previously Paul served on the Advisory Board of the Center for Strategic and International Studies (CSIS) and as a member of the Private Sector Advisory Group to the Department of Homeland Security.

Paul has contributed significantly to Denison University’s success, where he served as a trustee from 1999-2016. Paul was made a lifetime trustee in 2017. He serves on the Investment Committee. From 1971-1999, and again in 2002 and 2021, Paul served as a reunion volunteer. He served on the Reunion Gift Committee in 2011. He is a major gift donor and regular donor to the annual fund.

While a student at Denison University, Paul was a member of the Campus Government Association, Delta Upsilon, Phi Betta Kappa, and a History Fellow.

Paul and his wife, Ingrid, live in Boston, Massachusetts, and Santa Fe, New Mexico. Three of their four children and one of their daughters-in-law have served in the military, in the Marines, Navy, and Air Force, for over 50 years collectively. Members of their family have deployed to Afghanistan, Iraq, and multiple locations in the Indo-Pacific region.