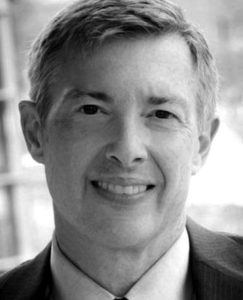 Steve is mission-driven and dedicated to public service. He has had a distinguished career working for nonprofit organizations. Early in his career, he developed his own personal mission statement: to save lives, build community, and help give people hope and confidence. It has guided him since. After graduating from Denison, Steve worked for the Ohio Legislature and City of Cleveland before joining the American Red Cross in Columbus. He worked for several decades at the Red Cross, mostly at its national headquarters in D.C., with breaks to earn his M.B.A. at Yale and serve at the Pentagon as a defense analyst. At the Red Cross headquarters, his roles included government relations, corporate planning and evaluation, program management, and fundraising.

In 2008, Steve relocated his family to Little Rock, Ark., to become the first chief operating officer for Heifer International, a development organization that helps smallholder farmers develop livelihoods in 32 countries. During his tenure at Heifer, he was the architect of a transformational strategy to dramatically scale Heifer’s programs; update its branding; build local, national and international partnerships; create a diversified and sustainable funding model; rationalize, focus, and unify its operations; and develop systems, measures, and metrics to enhance evidence-based decision-making.

In 2016, Steve returned to the D.C. area to join Evidence Action, a start-up international development organization with roots in the Effective Altruism Movement, as COO and board secretary.

Steve and his wife, Eileen, have been married for 36 years and have two daughters. Callie Denne Elliott, Denison Class of ’10, has followed in Steve’s footsteps, working for a nonprofit in Louisville, Ky., where she lives with her husband. Julia Denne is a pastry chef in Arlington, Va.

Steve has been a lay leader at Westminster Presbyterian Church and served on Denison’s Alumni Council.

Following a mid-life learn-to-row class, Steve fell in love with rowing. He rows competitively for Alexandria Community Rowing on the Potomac River. He is a lifelong Cleveland Indians fan and a season ticket-holder for Washington Nationals games.