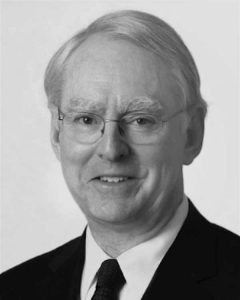 Tom Hoaglin has recently served on the Board of Directors for American Electric Power, sitting on the Corporate Governance and Human Resources committees. In addition, he formerly served for nine years as the lead independent director of AEP. In 2020, Tom retired from 30 years of service on the Board of Directors for the Gorman-Rupp Company, a pump manufacturer based in Mansfield, Ohio.

Tom held executive leadership roles in the banking industry for more than 34 years, including numerous executive positions with Bank One Corporation from 1974 to 1999. There, he served as chairman and CEO of Bank One Ohio Corporation and Bank One Services Corporation. Tom also served as CEO of Ohio Bank One affiliate banks in Wooster, Mansfield, and Dayton, as well as in Dallas, Texas. He joined Huntington Bancshares, Inc. in 2001 as chairman, president, and CEO. He retired from Huntington in 2009.

Tom serves his community as a board member of the Shackelford Family Foundation in Columbus. He formerly served as a chairman of the Columbus Chamber of Commerce and the Columbus Downtown Development Corporation. He is a former board member of the Columbus Partnership and former chairman of the Board of Directors of OhioHealth, the largest hospital system serving Central Ohio. Tom also has the distinction of an education center at the Ohio Health Westerville campus being named in his honor.

While at Denison, Tom was a member of Beta Theta Pi and participated in the Denison Campus Government Association. His academic and leadership achievements earned him membership in Phi Beta Kappa and Omicron Delta Kappa honoraries.

As an alumnus, Tom’s meritorious service to Denison includes his dedication as an exceptional volunteer and generous donor. He served as a university trustee for 22 years and chaired the board for five years from 2009 to 2014. On the board, he was a member of the committees responsible for Trustee Affairs, Enrollment, and Institutional Advancement. His leadership of the Higher Ground Campaign as co-chair of the Campaign Executive Committee resulted in the attainment of more than $177 million, 17 new endowed professorships, more than $20 million for scholarships, the new Bryant Arts Center, and an increase in Denison’s endowment by $61.5 million. Tom was honored with status as a life trustee in 2015.

Tom has supported students as a career advisor. He provided graceful leadership in times of transition, chairing the search that brought President Dale Knobel to Denison in 1998 and shepherding the board during the arrival of President Adam Weinberg in 2013. He and his wife, Ann, a Denison classmate, have hosted countless Denison events in the Columbus area, and they were both notably recognized in May of 2021 for their philanthropic leadership in the Ann and Thomas Hoaglin Wellness Center at Denison, which is scheduled to open in the fall of 2022.

Tom and Ann have lived in Columbus since returning to Ohio in 2001. Tom is an active member of the Broad Street Presbyterian Church.